Closed – See you next April!

The Ellipse is across the drive from the White Garden and is composed of four lawn panels bordered by large boxwoods with a fountain at the center. Note the north/south walkway design is offset to accommodate two large pre-existing cedars.

In the southwest panel of the ellipse is a large obelisk with two sets of stone blocks on either side in the ground.  The blocks mark the changing position of the earth to the sun over the course of the year, given the earth’s tilt on its axis at 23°. This pattern is called an Analemma.

In the southeast panel of the ellipse is a sundial which is designed to accurately mark the time by the shadow of the sun over the steel gnomon, adjusted for the exact location of these gardens on the globe.

In the northeast panel is the Circle of Thought, featuring the busts of famous thinkers and writers from ancient Greece and Rome, the Renaissance, the American Revolution, and modern times. 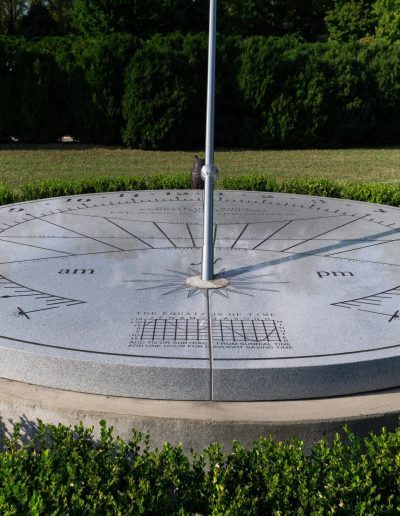 Back to All Gardens